Coronavirus Update: Due to the latest advice from the Government on Covid-19 we are suspending our face to face services from 17 March 2020.
Click here for more INFORMATION and how you can access SUPPORT from home.

NEW! Our engagement with LGBTQ women

LGBTQ women have too often been left behind in research and support services. They are rarely at the centre of projects about women’s health or at the heart of LGBTQ services. This omission isn’t because LGBTQ women don’t need support – there is reliable evidence that LGBTQ women face higher-than-average levels of mental ill-health, struggle with isolation, and have negative experiences in healthcare. 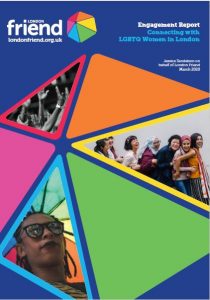 To mark the start of National Lesbian, Bisexual and Trans Women’s Health Week 2020 we are publishing this report based on an engagement project we carried out in 2019. This report outlines London Friend’s engagement project with LGBTQ women in London. By speaking directly to lesbians, gay women, bi women, trans women, and queer women in London, we wanted to find out about some of their support needs. We also connected with existing women’s groups to learn about their work and build new partnerships.

Our findings are in line with existing evidence about the support needs of LGBTQ women and their experiences of mainstream services. They emphasize the need for London Friend and all LGBTQ organisations to increase our efforts to work with women. London Friend already runs two support and social groups specifically for women, but it is clear that we need to do more.

We plan to take action by building partnerships with groups that work with LGBTQ women. In our initial meetings, we heard that the groups need more physical space since accessible and safe spaces are hard to find in London. There is also potential for London Friend to help with capacity development, sharing volunteers, and raising awareness about what is available. By developing partnerships, we hope to share resources, expertise, and avoid duplicating efforts.

This report is a first step for London Friend and our findings are a starting point for future work to support LGBTQ women. We hope other LGBTQ sector organisations can also benefit from our learning as they plan and deliver their services to LGBTQ women.

Download a copy of the engagement project report here.

Our engagement project was part of a wider one-year project aiming to improve our work with LGBTQ women. This funding was awarded by The London Community Foundation as part of the Tampon Tax Community Fund. During the year London Friend also provided new social activity groups to LGBTQ women, reaching 153 women, 71 of which were new to London Friend. 18 women attended a ‘crafternoon’ group programme, and 7 women attended a series of stand-up comedy workshops, culminating in a performance at Central Station.