This morning’s Good Morning Britain article on ‘gay cure’ therapies makes for uneasy viewing. The segment offers a lengthy platform to Dr Michael Davidson, who supports gay conversion therapy and views homosexuality as ‘sinful’, an ‘aberration’, and a ‘maladjustment’.

Dr Davidson is, rightly, challenged by the presenters but why has the show given these views airtime in the first place?

There’s good reason to discuss the practice which purports to offer those conflicted about their same-sex attraction an answer, and a route out of a situation they feel uncomfortable with. However, the practice has been roundly condemned by all the major UK psychotherapy organisations, who collectively have “concluded there is no good evidence that it works, while there is evidence that it has the potential to cause harm”.

Then GMB piece sets itself up as an exposé, with undercover journalist Josh Parry reporting on the response offered by a local service. So far so good, but the ensuing studio discussion leads to an unpleasant exchange between Dr Davidson and presenter Piers Morgan. Although Davidson’s views are condemned, and the consensus of the main psychotherapy bodies opposing the practice is stated, something feels particularly ugly in this approach.

GMB got off to a questionable start, Tweeting a flippant trail for the piece, and setting a tone for the sensationalist interview that followed. 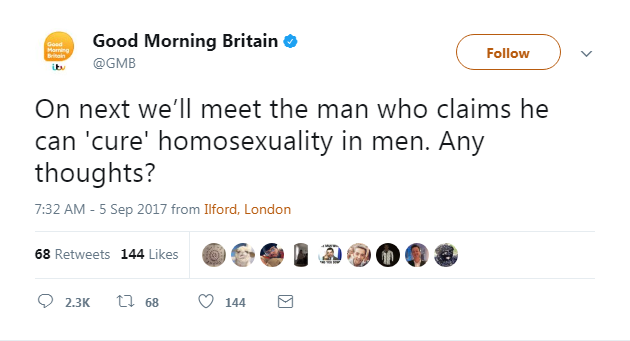 Gay people deserve better than this from our media. There’s plenty to say about this harmful practice which has its roots in the notion that being gay is undesirable, unwanted, and to be rid of, but this is not the way to tackle it. Conversion therapy creates a dangerous premise, and reinforces the negative stereotypes many lesbian, gay and bisexual people have had to battle all our lives. Hosting a proponent of it making claims it offers people unhappy with their sexual attraction a way to deny it is not just ‘having a lively debate’, it’s giving a platform to unethical and potentially harmful practice. There are many parallels in medicine and healthcare where we just wouldn’t tolerate this; let’s give lesbian, gay and bisexual people the same respect.

The 2015 Memorandum of Understanding from all the major UK therapy organisations opposing conversion therapy can be found here, along with an updated statement of opposition from 2017 here. London Friend supports these statements, and opposes all attempts to ‘cure’ LGBT people of their sexual orientation or gender identity.